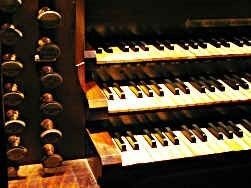 A History of St Mary's Organs

The earliest recollections of an Organ in Moseley Parish Church date back prior to the reign of Her Most Gracious Majesty (Queen Victoria), probably to the alteration of the Church in 1823. This instrument was a small barrel-organ, some five feet wide and six feet high, and played, by means of a handle, eight or nine hymn tunes. It was placed in a loft supported by cross-beams, in the position now occupied by the gallery; the approach being through the belfry. The choir stood in front of the Organ. One of the Bass Choristers was Tom Maydew, the blacksmith, who had a habit of working on Sundays, and during the intervals between the singing was wont to repair to his forge in the yard below, from which he would be summoned by a boy putting his head through the belfry window and saying "Mr Maydew, the Psalm's coming on", whereupon he would roll his apron round his waist, hurry up to the loft, and join lustily in the singing.

The supply of tunes in the Organ now (after 15 years? ed.) being considered inadequate to the Service, one of the wardens, Mr James Guest, who lived at Elmhurst (formerly the Vicarage) (now the Ford garage. ed.) engaged a Band, formed chiefly of the Cole family. Mr Cole and his four sons, with another whose name we have not, were the instrumentalists; while his daughters sang in the Choir. The Band consisted of Violin, Oboe, Clarionet, Bassoon and Double Bass, and was engaged for three months, the expense, however, was found to be too great and the Band was "abandoned".

Miss Sarah Taylor, of Moor Green Hall (now Holder's Gardens? ed.), then presented the Church with a new Barrel-Organ of the most improved mechanism. These instruments were at that time being manufactured by three important London firms - Messrs. Walker, Gray and Bryceson. Our instrument was built by Messrs. Walker, and was a handsome and imposing structure of some ten feet high, seven feet wide and six feet deep; and was erected in the gallery. It had three barrels, each of which could be adjusted to a number of tunes, and had a repertoire of thirty tunes; a list of which was placed on the side of the Organ. It was encased in a panelled case of solid oak, and showed a row of gilt organ-pipes in the front. The wind was supplied by a foot treadle, and the tunes played by a handle: both being manipulated by the same individual; and it is interesting to note that this organ was played for a long period by Mr Halward, whose son and grandson have been for many years, and still are, respected members of our Choir. This Organ eventually found its way to Yardley Wood Parish Church.

The first manual Organ possessed by our Church was built about the year 1853, by Messrs. E Bosward & Sons of Birmingham. It had two manuals and a pedal board. The Swell went down only to Tenor C, the Great was extended to the lower G. The composition of the Organ was as follows:-

This Organ was erected in the gallery, the Choir being at the other end of the Nave, in the position now occupied by the long seats in front of the Chancel. Under these circumstances, the Organ being too small to make its weight felt, the Psalms were not always chanted with that smoothness which is desirable in "Quires and places where they sing", and in a good hearty Hymn the Organist had his choice as to whether he would accompany the Choir or the congregation. But the lapse of time leads us to look upon these imperfections with an indulgent eye, and one has still a kindly recollection of many sweet services in the rural Church, whose exterior picturesqueness caused it to be generally admired by visitors from the neighbouring town.

In the days of 1860 - 70 Moseley was still a country village, where the roses and honeysuckle grew unplucked outside the cottages by the wayside. The nearest approach from town was by the Moseley Road, through the great white toll-gate, near the corner of what is now Park Hill, or by footpaths through Jakeman's Walk and, crossing the Edgbaston Lane, alongside the Park Wall, coming out on the Moseley side of the toll-gate. The way to the new Vicarage was by a pathway through the fields by the side of Elmhurst, where lived the genial Mr. Frank Badams. The Rev. John R. Davison was at this time our much-loved Vicar, Mr. James Bullock, popularly known as the "Bishop of Moseley" our very beau-ideal of a Parish Clerk. That fine old English gentleman, Mr Dawes, lived at the Hall, Mr. Mitchell, a worthy companion, at Bank House (possibly now Dowells Retreat, ed). Messrs. Arnold and Willmot were perpetual Churchwardens, Mr. John Avins and Mr. Lyndon active Church advisers.

The Misses Anderton were dispensing their bounteous gifts to the Church and Mr. T C S Kynnersley, the then Stipendiary of Birmingham, was setting the worthy example to Churchmen which he maintained through out his life.

About this time (1868) Mr. E M Sneyd Kynnersley commenced to take that interest in our Services which he has retained ever since, the fine collection of music which the Church possesses is a tribute to his zeal and generosity, and to him entirely belongs the development of the Service into that happy blending of the Cathedral and the Parochial, which, it is gratifying to know, has received expressions of approval and thankfulness from many devout members of our congregation.

The writer, then but a youth, was appointed Organist in March, 1871, having previously acted as deputy for his tutor, Mr. Walter Brooks at St. Martin's Church. Two years later the new Chancel was built. The Organ was enlarged by Messrs. Halmshaw & Sons, removed from the gallery, and placed in a small Organ-Chamber at the East end. Dr. Belcher performed the opening services on August 3rd. 1873, the preacher being the Rev. G W Murray, Vicar of Bromsgrove. (St Mary's was in the Parish of Bromsgrove at one time. ed). In August, 1879 an orifice was made in the wall behind the pulpit to enable the Organ to be better heard in the church, and the old Dulciana stop carried down to CC to supply the front with speaking pipes.

In the meantime the Rev. J R Davison died, regretted most by those who knew him best, and, honourable tribute, greatly lamented by the poor of the Parish.

In March, 1877, our present Vicar came among us. The Rev. W H Colmore's kindly courtesy and consideration to those engaged in the Services of the Church has assisted that work forward with smoothness and harmony, the aim of all being the ennobling and beautifying of our Service for the help and comfort of our fellow-worshippers.

Moseley then began to grow apace, the needs of the Church became pressing, and the magnificent North aisle was built and opened in 1887. This opportunity was taken to build a fine Organ-Chamber. Strange to relate, the Organist was appointed a member of the Committee, and, consequently had a voice in securing that due regard was paid to the acoustic properties of the roof in its construction.

The way was thus prepared for our present Organ, which was built for an Exhibition at Folkestone by Messrs. H Jones & Son; it was bought for some hundreds of pounds less than its original price, transplanted to our Church, and the fine 16-ft Open Diapason Pedal Pipes facing the North Aisle were added. It bears the following inscription:- "To the glory of God and in grateful commemoration of the reign of His minister, our Sovereign Lady Queen Victoria; this Chamber and the Organ therein were erected by the Parishioners of Moseley, 1887." The names of the clergy and wardens were not included in this inscription, but it was suggested by a certain witty gentleman that the latter might have been immortalised by the addition of the verse of Scripture - "And so are the Cattle on a thousand Hills." *

The Organ was open on December 2nd, 1887, the preacher being the Rev. Canon Claughton, and the Organist on this occasion the Rev. C Hylton Stewart (Mr. Kynnersley's friend), whose tune to the hymn "Hark the sound of holy voices" (cannot find this tune in any hymn-book, ed) is a great favourite with us. The instrument was prounced to be of fine quality, and particularly adapted to the accompanying of Church Service; probably it is never more effective than at our Early Choral Celebrations on the Great Festivals.

The Organ has 39 stops - 9 in the swell including a fine Salcional and Voix Celeste; 10 in the Great; 7 in the Choir, including a fine Clarionet, a good Clarabella and Dulciana; 6 Pedal Stops including a Cross Quint and 7 Couplers. It has an excellent Tremulant and an ingenious and unique piece of mechanism which connects the whole of the Stops except the Cross Quint, with two centre pedals, and acting independently of the Couplers, enables the performer to prepare and use special combinations with ease and effect. The Organ is enclosed in a handsome case of solid oak, well designed with elaberate carving on the front and a graceful arrangement of pipes of spotted metal, and would present an imposing appearance from the back of the church were the wall and arches at the back of the pulpit removed. If it has not that role which is so great a charm in our Cathedrals, it is due to the defective acoustics of the church, and our congregation will never know what their organ and choir really are until the contemplated enlargement of the chancel and elevation of the roof of the nave are achieved - two events earnestly to be desired in the interests of the beauty of our church, and the dignity of its worship.

* The wardens were the late Mr: John Cattell and Mr. W G Hills.

This account formed an article written by
F.H. Bell for the Moseley Parish Church
Magazine, September 1893